After a job interview Thursday, I went and got macarons from one of the places on my list of macaron patisseries to try (yes I have a list). I had heard relatively good things about La Bamboche, so I was eager to go and check out the shop myself. The woman behind the counter was very nice, although I did wait for a few minutes before she came out of the back.

However, the cookies overall are a bit on the dry side, they kind of crumble apart as soon as you take the first bite, but they do have a large amount of filling, which I like. They were packaged in a plain square box that wasn’t made for macarons, so they kind of slid around in there a bit. Also, you aren’t able to see the filling from a side profile of the cookie, which I kind of didn’t like.  I ended up getting these six flavours:

Coconut - this one didn’t taste like coconut at all, in fact, there was a kind of citrusy curd in the middle that I wasn’t expecting. I don’t think that I would get this one again given the surprise.

Strawberry champagne - I really really wanted to like this macaron, but I just didn’t. The shell was a pale robins egg blue and the filling a pale pink, so when you bit into it, it just looked like cotton candy. I feel like maybe a pale beige with pink filling would have looked more refined and conveyed the flavour better. The filling tasted only faintly of strawberries and instead of champagne I got a kind of beer-like flavour, which is unfortunate because I do not like beer. I wouldn’t get this flavour again.

Pistachio - the cookie crumbled apart as soon as I bit into it, but the flavour of the filling was perfect. You could taste the subtle toasted quality in the pistachios.

Bacon & Beer - I thought that this one wasn’t going to be that great, but as it turns out, I liked it even more than the strawberry change flavour. Even though it was beer flavoured, it didn’t have that very alcohol-ish kind of taste, so overall it was rather enjoyable.

Lavender - I like the taste of lavender but there were little buds on the top that I didn’t necessarily want to eat, so I picked those off. Also, there was a chocolate ganache inside which I though was a bit too strong of a flavour for pairing with the lavender. I think something more vanilla based would have been nice in order to let the lavender flavour shine through. It gets slightly overpowered by the chocolate. 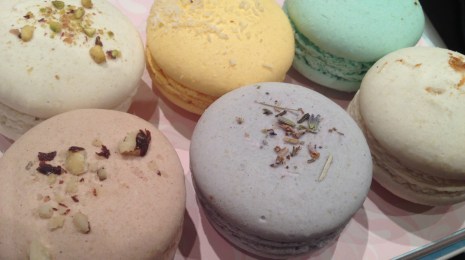 Overall, I’m glad that I tried the macarons, but I don’t think that I would go out of my way to get them from La Bamboche again.

Have you had them from La Bamboche? What did you think? Let me know!